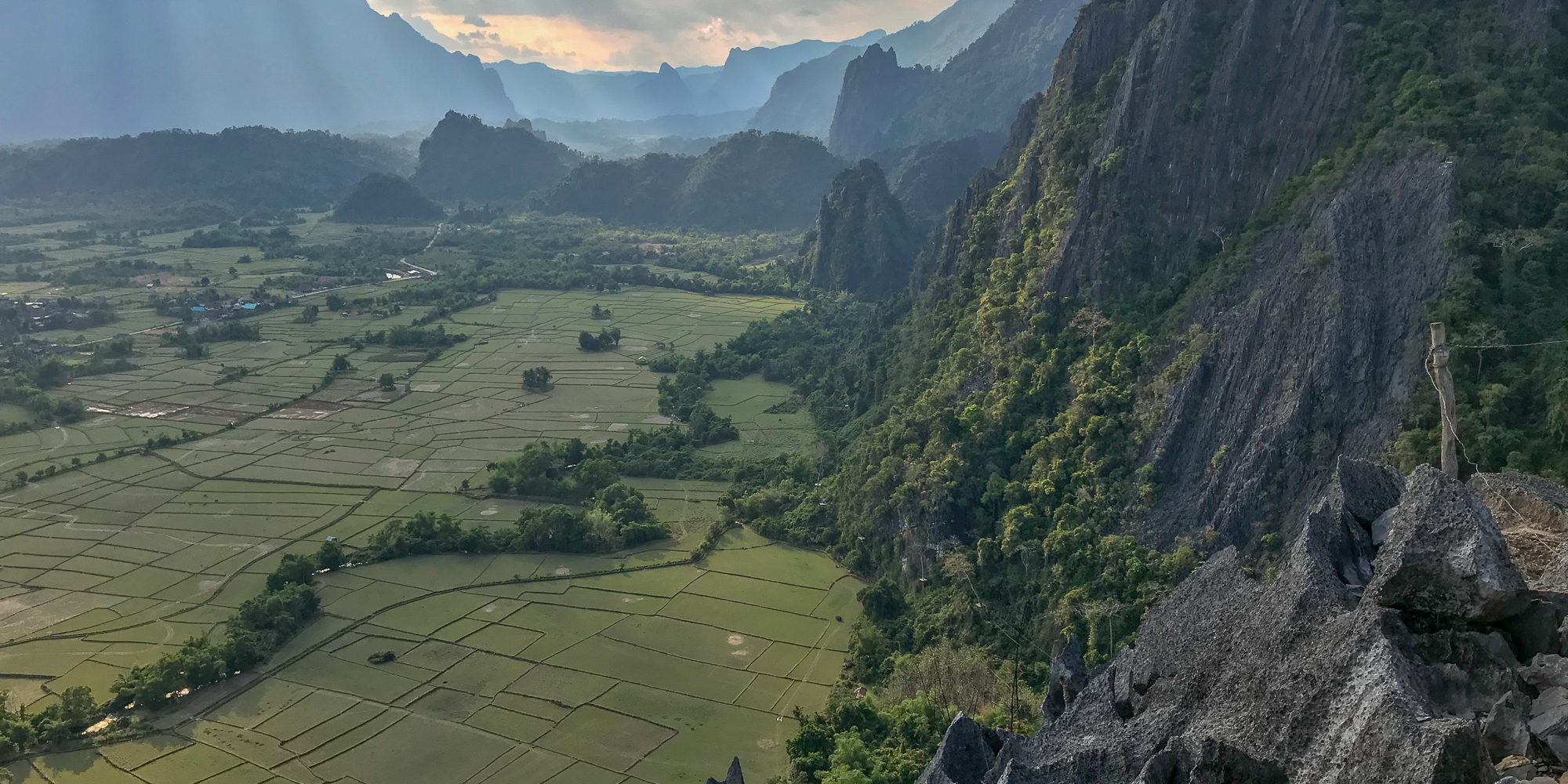 Our travel plans always included Cambodia and Vietnam. But should we also visit neighboring Laos? None of us had any idea about Laos. It turned out to be a fascinating place to visit.

When people talk about either Laos or Cambodia, the other one is very frequently mentioned as well. Somehow, this fused the two countries together in our minds as kind of similar. Don’t make that mistake – the two are very different animals.

So, we’ve been to Cambodia – should we also make it a travel through Laos and Cambodia? At some point during our travel, we had to decide if we wanted to visit Laos.

Let me outline our usual approach for tackling this question. First, we make a google image search for the country. Laos easily passed that test with beautiful Buddhist temples and stunning mountain landscapes.

Next, we consult the Reise- und Sicherheitshinweise des Auswärtigen Amtes (Travel- and safety-information from the German foreign ministry) to see if we should be worried. The page usually errs on the side of caution, so don’t be too afraid of the things you read there. There are some warnings about Laos but nothing severe enough to scare us away.

At this point, Katja’s and my approach diverge. Katja starts reading travel guides about a potential destination. Whereas I start reading about the cuisine and regional specialty foods and drinks.

I’m not sure, what Katja learned from travel guides, but reading about Laotian food sold it for me – we had to go there! More on that further down.

Strangely enough, after a decision to visit a place has been made, I also start reading about it – mostly on wikivoyage and wikipedia. We’ll write more about our route through and experiences in Laos in another post. This post will focus on some of the fascinating things we learned about Laos in our research and while traveling there.

Laos is a rather long and thin country located in-between Vietnam, Cambodia, and Thailand with borders to China and Burma in the North. It is often considered the forgotten Indochinese country – at least regarding tourism. Since it has no coast and therefore no beautiful beaches like its better-known neighbors, it flies below the radar for most tourists. However, this is absolutely undeserved. It turned out to be a beautiful country, a very welcoming culture and surprisingly easy to travel.

However, the status of being a bit forgotten and behind also has some unpleasant side-effects. Some parts of Laos have a reputation for being “anything goes” among party tourists. Drugs are easily available and alcohols is fairly cheap. This has led to many accidents and a few fatalities among tourists and the government starts to crack down on those areas. We still saw a few places with “magic menus”, but these days they are a rare exception.

I tried to find a list of dangerous and lethal animals in Laos – better be prepared. However, I quickly learned that animals are not the thing that makes Laos dangerous and potentially lethal.
Laos holds the very sad world record for being the most bombed country in history (measured in tons of bombs per capita). During the Vietnam War, the United States dropped over 80 million bombs on Laos soil. That equals to one planeload of bombs every 8 minutes; for 24 hours; continuously for 9 years – unbelievable. The United States weren’t even at war with Laos. The bombs were aimed at the Ho Chi Minh trail (cutting off support for the North Vietnamese) and to resist the communist forces in Laos. Both were not successful.

And to make matters worse, a significant part of those bombs were cluster bombs, that litter the area with smaller bombs. About 30% of those didn’t explode, leaving huge areas of land littered with highly dangerous, unexploded bombs. Those unexploded bombs (called UXO) still cause death and injury among the people in Laos. Especially children are in danger since the cluster bombs look a bit like toys.

Therefore, those unexploded bombs are still the biggest danger in the nature of Laos – far more dangerous than any poisonous or wild animal. The touristic areas are cleared today, but it is still recommended not to leave the beaten paths and wander freely into nature. It might end with a boom.

This is especially sad since the nature in Laos is stunning. Beautiful mountain ranges, the mighty Mekong, clear springs and waterfalls, scary caves, and lush rice terraces to name only the parts we marveled at with our own eyes.

We arrived in April and quickly learned, that this time of the year is called Hot Season for a reason. 40 degrees Celsius in the shade was quite common. This was no weather for the two of us. We struggled to get through the day. But April also marks the change of seasons in Laos. It is the start of the wet season. On one sunny afternoon, completely out of the blue, a wild rain storm appeared, that impressed us with its force. It caused quite a bit of havoc in the area and made us question the rigidity of our hotel room more than once. And then, after 30 min of intense tropical storm, it was all over again as quickly as it began. The sun was shining as if nothing had happened – only that it was shining on new lakes, blown over advertisement boards and uprooted trees. Apparently, there is also a third season – the dry season. Presumably, it also deserves its name.

Laos culture is rooted very deeply in Buddhism. Every major city has dozens of beautiful Buddhist temples. Apparently, most men spend at least a few years of their lives as a monk in the temples.

The local flavor of Buddhism seems quite strict and conservative. Monks are not allowed to touch money (or women). They are also not allowed to eat after noon or prepare their own food. They have to live entirely off of alms. This leads to some very picturesque scenes when every morning at 5:30 long rows of bright orange monks slowly walk through the streets and collect their alms for the day.
This is such an ingrained part of the culture in Laos, that there is a very strict curfew to make sure, the local population has no problem waking up early every morning to support the monks.

Maybe due to the strong influence of Buddhism, we got the impression that the majority of people in Laos are heart warningly friendly and open towards us. Wherever we went, we felt warmly welcomed. Not only as a money cow that needs milking, like it sometimes felt in Vietnam. Instead, people seemed honestly friendly and interested in us a fellow human being.

I should finally mention the food in Laos. There is one thing, that immediately made me curious about Laos. All throughout our journey so far, I enjoyed the various kinds of treats based on sticky rice that were available. There is just something about the chewy consistency of sticky rice, that I absolutely love.

And Laos is the only country in the world, where sticky rice is the main staple food. Many countries consume sticky rice, but only in Laos is it (still) the dominant variant of rice being eaten. Obviously, I had to visit this magical place 🙂

The traditional way of preparing sticky rice in Laos is to soak it for a night, then steam it for an hour. Finally, it is kneaded a bit, to release excess moisture. The end result of this laborious, long process is a big bowl of rice, that – when done properly – sticks to itself, but not to your fingers. The people in Laos then take small chunks of the sticky rice, form it into balls and dip them in sauces, curries or pastes. No chopsticks or spoons necessary. But to do this right (i.e. without causing a huge mess) is a bit tricky. Therefore foreigners are usually served at least a spoon.

The rest of the cuisine is not too special, to be honest. Very meat and fish heavy. Lots of fresh salads. In general not too spicy. We had a tasty time in Laos, even though it was a bit more difficult for Katja sometimes. The local flavor of Buddhism allows the monks and strong believers to consume meat. Therefore vegetarian food isn’t as easy to come by as it was for example in Vietnam.

One final word of warning: Laos is a rather poor country and as such, especially outside of the main tourist spots, they eat everything that isn’t fast enough to get away. Insects, spiders, dogs, and rats can all be found easily on local markets. Be careful what you order…

Of course, Laos is no heaven on earth. Besides the torture from the sun and the thread from lingering bombs, there are some more things you might want to consider before going there.

Most scary to me are the health-related aspects. As a tropical country, there are times, where mosquitos are a real issue. As such, serious mosquito-related diseases, like Malaria and Dengue are present in Laos. There is apparently also a real danger from Rabies in Laos. Protect yourself and talk to a professional about vaccination long before you go there!

Next thing on the health-related list is the reputation of health clinics and doctors in Laos. The general recommendation seems to be “when you injure yourself, go to Thailand as fast as possible”. Not very reassuring…

Another dark side worth mentioning are the social and cultural difficulties. With Laos being a single party socialist state, it is wise to not criticize (or better yet talk about) the government. And the role of the women also doesn’t seem to be equal. While there is no open oppression against women, apparently girls get told, that they can’t reach spiritual enlightenment anyway and have to wait until they get reborn as a male. I can only assume what such words do to a young person in a strongly Buddhist culture like Laos.

But don’t let that scare you away from Laos. As always, treat other people and cultures respectfully and you are very likely to have some great experiences in Laos.

We both really enjoyed our time in this country. Even though we suffered from the unbearable heat, something just felt right there. The people were lovely, the food was good and the country was surprisingly easy to travel (on the main tourist routes at least).

Laos turned out to be a very positive surprise to both of us. Maybe because we came into Laos with zero expectations. Maybe we just enjoyed the very leisurely pace of life there. Maybe it was just the heartwarmingly friendly people. But somehow, we both feel, like we are not yet done with Laos. One might say, we fell in love with this little, unknown country. This might not have been the last time, we went there…