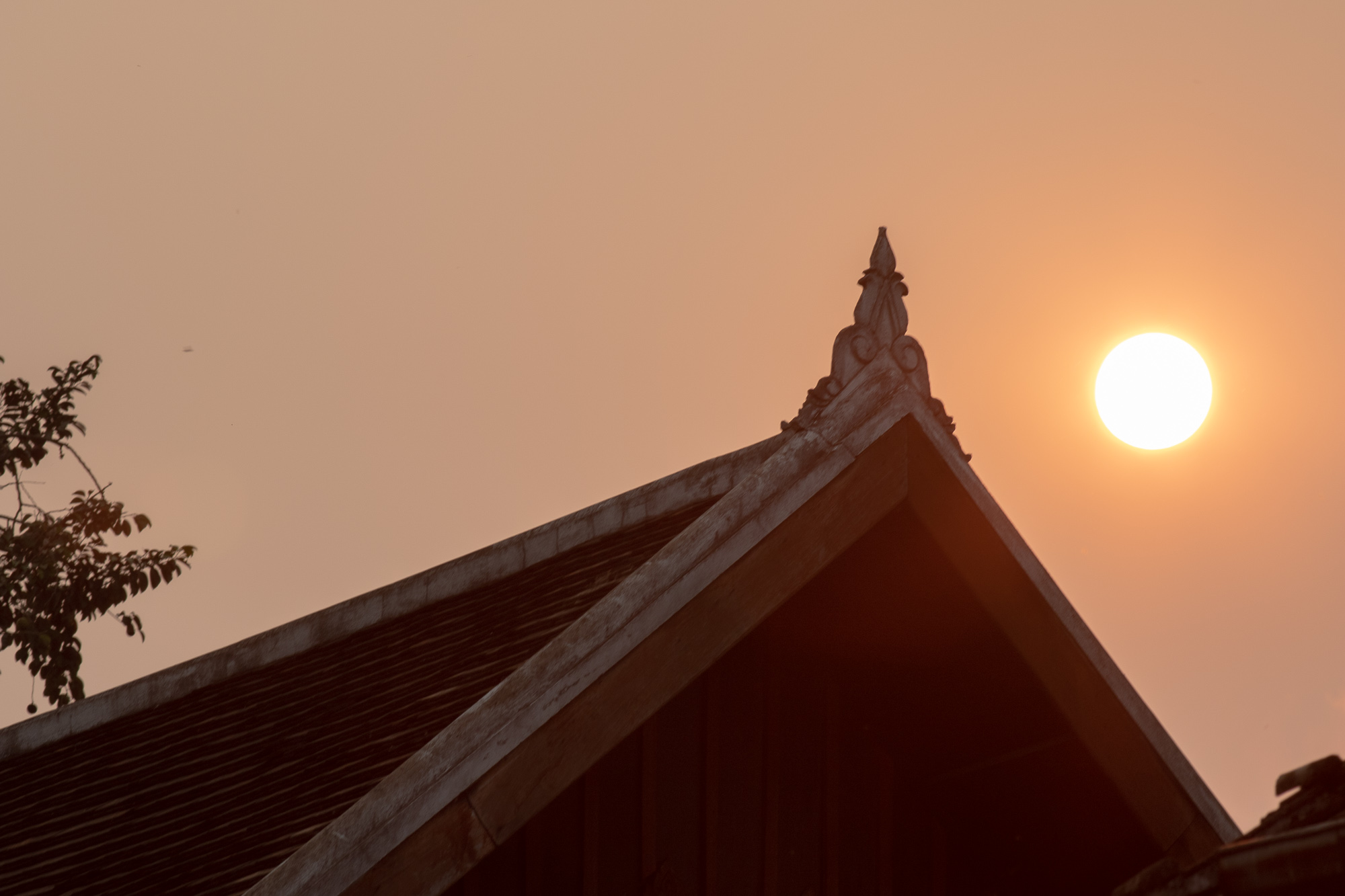 We jumped head first into the cold water that Laos was to us and were greeted with a friendly sabaidee and rewarded with a great time in a fascinating country.

We already wrote about how Laos was a blank spot on our map and since we didn’t really take the time to prepare properly (we were too busy experiencing Vietnam) we chose a very easy and beginner friendly route through Laos.

We had two weeks and decided to share them evenly among three places: Luang Prabang, Vang Vieng and Vientiane.

We booked a flight from Hanoi to Luang Prabang (LP) and the first few nights ahead of time. There is also a bus from Hanoi to LP that goes through twisting mountain roads for about 20h. But we heard mixed things about it and wanted to play it safe. We also booked our exit flight from Vientiane to Seoul, since we had business there. The plan was to just make everything in between up as we went along.

We arrived in LP quite late in the evening, but luckily our accommodation picked us up at the airport. Immigration was easy and felt very organized and professional. Even though it was already dark, it was still suspiciously warm outside, but we just brushed it off. At this point, we weren’t yet aware that the sun was going to try to boil us alive over the next days and weeks.

Our hotel was in a quiet side alley of LPs beautiful old city centre (world heritage material!) The old city centre is located on a peninsula between the Mekong and the Nam Khan (which is feeding into the Mekong). This peninsula is where we spend most of our time.

LP feels like every second building is another beautifully decorated Buddhist temple. There is a mountain with a stupa on top that provides a great view of the whole city and many small shops and restaurants fill the gaps between the temples. A great city to just randomly explore.

Climbing up that mountain and enjoying the view over LP, we were a bit surprised how small LP is. It is, after all, the second biggest city in Laos. But then again, Laos isn’t a very densely populated country.

We were very positively surprised by the mix of people. Even though this area was obviously very touristic, there was still a great mix of locals, people that just seem to have lived there forever and of course many monks wherever you go. Though, I’m afraid it won’t stay like that for long as Laos becomes more and more touristic…

We are not done yet

Our main objectives in LP were visiting a few temples, witnessing the morning alms giving and taking a tour to the nearby waterfalls (and of course eating lots and lots of sticky rice.) In many other places, this could all be done in a day or two. But Laos in April is different.

First, life in Laos has a very relaxed pace. This was a welcome contrast to Vietnam. No one is ever in any rush. No honking in the streets (really, no one honks! After Vietnam, this was nearly unbelievable). If you order something in a bar or restaurant, lean back and expect to wait a bit. This was great.

But it is also very understandable. The heat is unbearable! From about 11 until 14, it felt deadly to leave the shades. The sun was burning with an intensity that we hadn’t felt before in our lives. Our bodies had a bit of trouble getting used to that kind of heat and this really slowed us down.

But we were not in any kind of rush and through some dumb luck, we managed to be in LP during the Laotian New Years celebrations (we already wrote about it before.) So we just decided to approach it slowly, had many breaks (drank insane amounts of water) and extended our stay in LP by a few days. This also gave us more time to enjoy the New Years celebrations, which go on for about four days.

In the end, we didn’t manage to get anything more done in the extra days. We approaches everything slowly, took a lot of breaks and survived without dying of heat. We enjoyed the New Years celebrations and parades. We had a lovely cooking class with a visit to the local market. And we even found a nice yoga class in the evenings (which involuntarily qualified as hot yoga). The waterfalls just outside the city were a welcome refreshment as well.

Our next stop was Vang Vieng. If you try to read up about it, Vang Vieng can sound very off-putting. It is known for party tourism, drug abuse and a thing called “tubing”. You basically get in an inflated old tire, jump in a “tubing river” and enjoy. You will float along the river, which is littered with bars, that sell you more beer or other drugs. Wild water and drugs are not the best mix and apparently many tourists managed to drown there. This is bad publicity, so in 2016 the government started to crack down on this and “tubing” has become a lot more “civilised” recently. Still, reading all this, I asked Katja “Why are we going to Vang Vieng? What do you want to do there?” – “I don’t know. I did a google image search and it looked nice…” And sure enough, it does!

If you are not actively searching for the party areas, they are easy to avoid and the nature surrounding Vang Vieng is absolutely stunning! Since we stayed a bit longer in LP, we only had two full days (three nights) in Vang Vieng. In retrospect, we should have stayed longer. There was so much to discover.

Getting there was also easy. There are regular buses and minibuses. The route goes along a beautiful and twisted mountain road. However, from time to time, you are reminded that those roads are dangerous by a flipped truck or an old roadside wreckage. It’s a rough country…

After we checked in to our hotel and observed a frightening afternoon thunderstorm, we explored the city a bit. The city itself is not too interesting. Many hostels, bars and restaurants. But nothing too interesting.

We spent the next day hiking to a cave, discovered, that we are too scared to ever call ourselves Cave Explorers and then climbed a mountain. The mountain felt more like our natural habitat than the dark, scary cave.

While walking to the start of our hike, we were passed by some very fun looking beach-buggy-style carts. I knew, that I had to try them out! It was surprisingly hard to find anything about them on the English-speaking web. But it was easy enough to just walk into a few random tour providers and get a quote. We decided to join a 4h tour visiting two lagoons the next day.

Driving the cart was a lot of fun. I was grinning from ear to ear all the time. Even though the thing wasn’t very powerful, it turned a bumpy gravel road into the most fun playground! Highly recommended!

The lagoons were also worth visiting. Cold water to cool down from the burning sun and some very suspicious constructions to leap yourself into the water.

However, there was also a reminder, that driving is a dangerous activity. Our tour consisted of about eight carts. At one point, the cart in front of us suddenly failed to take a turn and went head first into a fairly deep ditch right before our eyes. I have no idea how they managed to miss the turn. It was neither sharp nor fast, nonetheless, they missed it…

Luckily, the two Koreans in there had only minor injuries: Some nasty bruises from the seatbelts, a few cuts and scratches. They were visibly shocked but managed to get out of the cart on their own before we could arrive to help. I usually travel with a first aid kit and handed out a few well-needed bandages. I hope this remains the only time I have to use the first aid kit on this journey!

In the end, we still had a great day with lots of fun. If you feel like your driving is good enough to take an occasional turn, you really shouldn’t miss those dirt carts in Vang Vieng!

The next day, we continued our route through Laos and got on a minibus to the capital, Vientiane. The ride was uneventful and the landscape around Vientiane, while still being nice, is a lot flatter and less impressive.

Vientiane is a fairly westernised, culturally mixed small city at the Mekong, which acts as the border to Thailand in this part of the country. Many western-style bars and restaurants, catering to the numerous expats living there, are littered throughout the city centre.

We had a nice time in Vientiane, but I think we would have enjoyed one additional day in the nature around Vang Vieng more. We visited a few more Buddhist Temples, tried more of the local food and even found a surprisingly well stocked (and shockingly expensive) Belgian beer bar. We couldn’t resist the temptation…

Even though the sun over Laos tried to burn us alive, something about the country and the people there just felt right to us. I think it’s fair to say that we both fell in love with Laos and our two weeks there were just too short.

While sitting at the surprisingly disappointing airport in Vientiane (even for me as a Berliner), waiting for our flight, we talked a lot about this. There is no one big thing we enjoyed in Laos. No single big highlight. We both needed a bit to get used to the food (digestion-wise) and even suffered considerably under the merciless heat. And yet, this country left a lasting and really positive impression on us. A country we both want to travel again.

If you want many more pictures of Laos, see our gallery or check out our Instagrams: Katja and Mo.