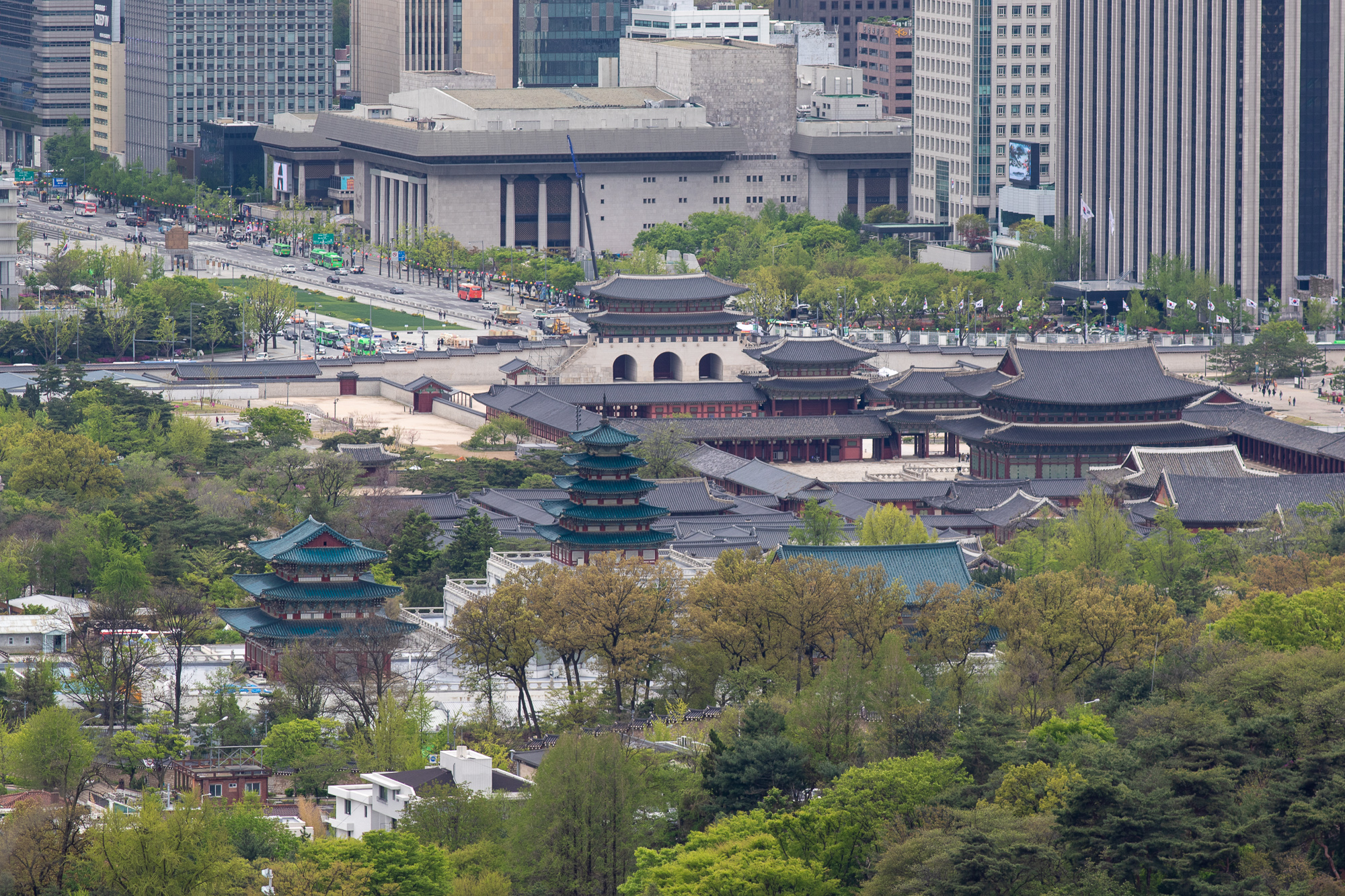 Korea – where should I start?
Maybe with the reason for our visit: My 30. Birthday!
We were discussing the birthday plans months ago. In the beginning, I really wanted to spend my birthday at a super fancy beach resort in South Vietnam, but this didn’t really match with our travel schedule.
A second idea and a very promising one was spending my birthday in Japan during cherry blossom. But to be honest, the risk of missing the cherry blossom was too big and while we were searching for flights from Laos to Japan we found out that every flight will have a long layover in Seoul… mmmh. Why not extend the long layover for a few more days?
Two years ago, we already spend ten days in Korea and were totally falling in love with the country, the food, and Seoul, especially with one specific pub. If you ask us for the top 5 pubs we ever visited, this one place in Seoul is definitely on our list.
Anyway, that’s the reason why we ended up spending my birthday in Seoul, and since we’re there, we could also spend a few more days in that country.

In love with Seoul

We arrived one day before my special day in Seoul at around 6 am. For the first nights we had booked a perfect accommodation in a traditional Korean house, also called hanok. We arrived there and everything was just perfect. Both of us were super tired, but we somehow arranged us with the situation and went out for a nice hike along the old city wall to overcome it.
It’s just wonderful to have nice hiking options directly in the middle of the city and we had a wonderful afternoon. The only “bad” thing was the weather… I was freezing for the first time since we left Germany in January (besides Kuala Lumpur public transportation). I was wearing everything warm that I found in my backpack and it was still cold. Especially after over 40 degrees in Laos, the 10 degrees in Seoul where too cold!
Anyway, our first day in Seoul was very nice and we both enjoyed it too much to be back in a first world land. Infrastructure as far as you can think, English speaking people everywhere, traffic lights and everyone sticks to it, more cars than scooters, well dressed business people and fancy, artsy shops. It felt a bit like coming home!
On our first evening, we made our way to our favorite bar to drink our favorite traditional Korean alcohol to make it perfect.

On the next day, we started slowly into my Birthday and everything was just perfect. Beginning with delicious breakfast and awesome weather, enjoying the day itself and ended with a delicious dinner and sparkling wine (How I spend this day in pictures).

After my Birthday we decided to stay a few more days in Seoul to just enjoy the city before we wanted to leave in the direction of Busan.

It was a wonderful time. We just enjoyed it. As I mentioned before, it felt a bit like coming home. Since this was our second visit, we already knew some nice spots so that we knew where to go and where to find the best street food. All the major sightseeing was already dealt with last time, so we felt no pressure to miss some important places.

Contemporary Korean Pop Culture is the weirdest and in a sense most loudest we’ve encountered so far. Not only is Korean pop music – K-Pop – frequently weird and wonderful (just remember Gangnam Style).

Also, wherever you look, there are funky, lovingly cute animals, pictures and animations. There are giant stores and museums dedicated to some of them. At some point, I couldn’t resist anymore. We are now a traveling party of three. A little pickled radish in a bunny costume joined us. It’s name is Muzi and it already has more social media fame than Mo 😉

Out in the Mountains

Additional to that, we love the mixture of the city: culture and nature. Within 15 minutes walk you can easily reach a nice small mountain for hiking or just a park with a public workout area.
On one evening we wanted to go for another city wall walk during twilight and what we found was one of the best places all over Seoul.
It’s just a 30-40minutes walk from the palace up the hill. You can easily go there at night as some parts are lit, but for some darker parts, it could be helpful to bring a flashlight with you. After a not really exhausting hike, you will reach the top of the mountain with a stunning view in every direction. The best thing: the park is open the whole night. We were there around 20:30 and at that time we were just about the only people there (we only had to share the place with a cute and shy little kitty). This really is a dream spot, especially with the haze of a spring breeze in my hair. I don’t know if you have the same thing: but I always have this one day, where I can feel the spring, summer, autumn or winter. I can’t really explain it, but it appears when everything fits perfectly together. On that evening I had this “spring is in the air” feeling. I wasn’t thinking that I will have this feeling during our trip to Asia. Lucky me!

Historical Moment, with People Dancing in the Streets!

After some days in the beautiful hanok (If you plan to stay at such a place, you should book it in advance, it’s expensive and often fully booked, but worth it) we moved into another accommodation, which was a bit cheaper and in a different area of the city close to a university. So we were hoping for good barista, beer, and art places and we were not disappointed.
The place we stayed was small but clean, cheap, and close to everything we needed.
The area around was lively and full of shopping and food places. It was weekend so it was getting super crowded in the evening, but the atmosphere was very good. Many young people were meeting there for food or just strolling around.
On one evening we had the best Kimchi jjigae (it’s kind of a spicy soup) in a very local environment. At the TV we were able to follow the historical meeting of Kim Jong Un and the president of South Korea, Moon Jae-in… but to be honest we had the feeling that the South Korean people didn’t care about that historical event too much. But my facebook timeline was full of comments and shared videos about this event.
Meanwhile, the TV in our restaurant showed live pictures of the two leaders walking side by side and we seemed to be the only ones taking notice. After dinner, we went out and observed the usual Korean street craziness that we observed every other evening as well. The youth was performing K-Pop dance routines on the street (occasionally making room for a truck or car passing by). Street musicians and singer-songwriters were gathering massive groups of fans under every second tree. The young Korean people are more open, outgoing and enthusiastic than you can imagine and the atmosphere is kind of catchy. Everyone was just enjoying their usual weekend evening and we were just a bit surprised by their apparent indifference to the meeting of the two big leaders. Party as usual…

I love the city and the way we lived there. Starting into the day with a nice coffee, strolling around in the spring sun, enjoying life in a close by park eating some street food, discover traditional teahouses and trying to learn the language a bit. And after all the more advanced travel countries we’ve been to, it was so relaxing.

Our time in that area of the city was surprisingly diverting. And after some crazy days and nights in Seoul, I was really sad that we were leaving. I know that we will come back, but I will miss that city and the food.

Our next stop was spontaneously planned. I always had this romantic idea of spending some days in a nice temple to order my life and mind while having some mindful moments with myself. Luckily we found something like that in Korea. Korea offers plenty of temple stay programs for local and foreign tourists and we found the perfect program for us at a temple named Golgulsa, inside the Gyeongju National Park in the south-east of Korea. More about that in the next post…

For some more and weird pictures see our gallery or check out our Instagrams: Katja and Mo.