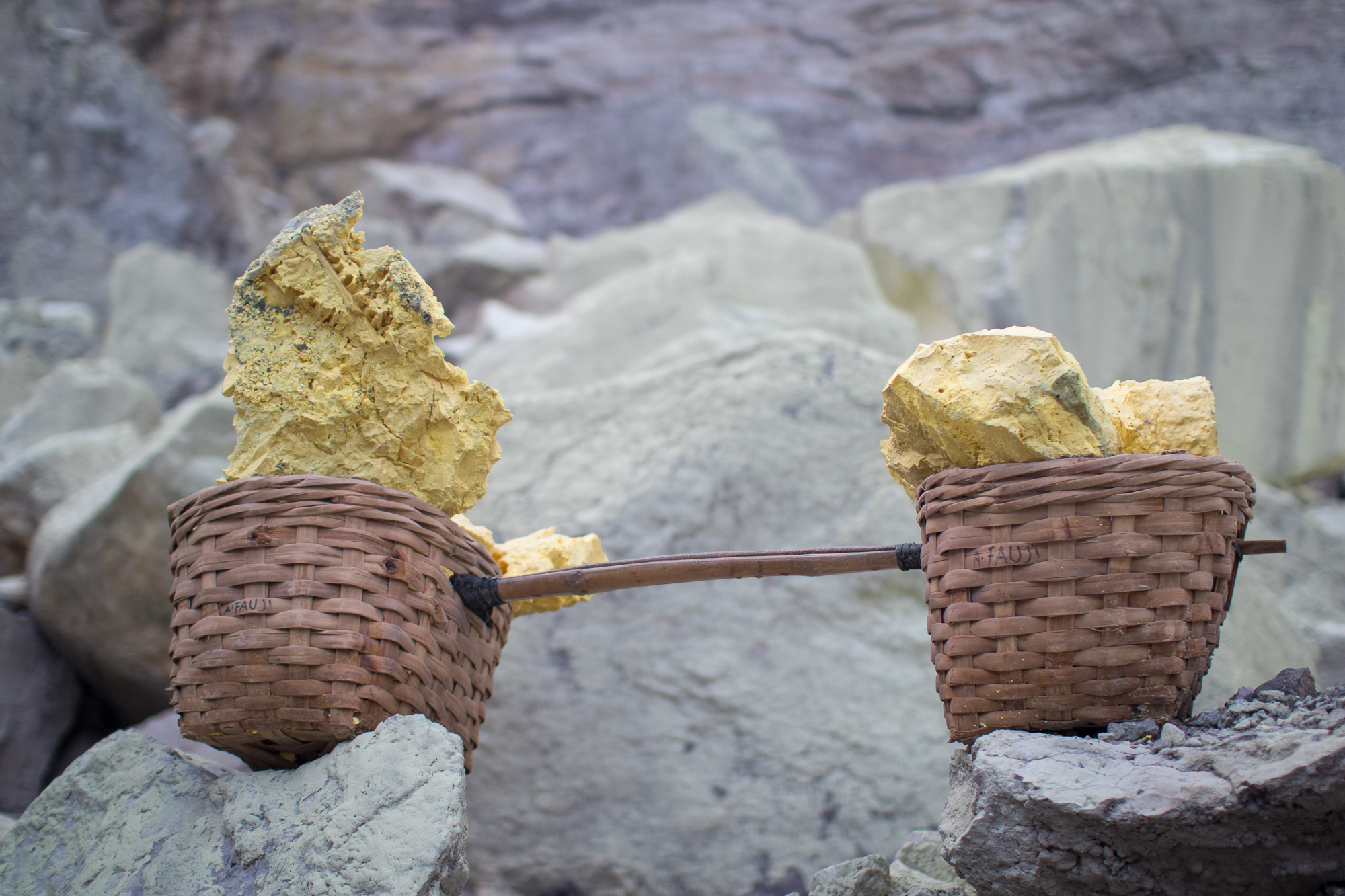 After a slightly bumpy departure from Bali. We took the Ferry from Gilimanuk to Banyuwangi.
(We decided to take the public bus to the ferry. So we just waited for the bus, and the driver really ripped us off. He caught us in a weak moment and we paid way too much – shit happens! No Karma points for him.)
I was so happy that Mo discovered a train station on the map not far from the ferry terminal. Welcome back infrastructure, scheduled times and fixed prices – huge success. No bargaining and annoying moments any longer. Nothing can stop us now!!!
The train took 15 minutes to Banyuwangi city and we just walked to our next homestay. Half an our later we arrived in a really nice neighborhood in a well looking homestay with awesome hosts.

The plan for the day was: find the way to our homestay, organize a tour to the Ijen Plateau, find a laundry service, catch some food.
Find the way: check. Our hosting family was super nice and helpful with the rest of the plan. The man works for a tour company and offered us a tour on the next day at a reasonably price. His wife offered us to wash our clothes and cook something for dinner. After 5 minutes in our homestay we had a tour, our laundry and food organized. Everything: check! That was too easy :).
After some good, homemade food (Mie Goreng) we went to bed quite early, because the tour pick up was scheduled for half past midnight.

The pickup is at such a weird time because the Ijen volcano is still active and there is sulphur mining inside the crater. In the darkness of the night, there are sometimes ghostly blue flames around the sulphur sources and the caldera is a beautiful place to see the sunrise.

The tour to Ijen was well organized. They picked us up as appointed and after a bit more than an hour we arrived at the entry to Ijen national park. Water, entry fees, English speaking guide, gas mask (!) and torch included.
The gas mask is needed to protect against the biting, unpleasant (and probably unhealthy) clouds of sulphur smoke.

The hike to the brink of the Ijen caldera is moderate and doable within less than one hour. Then the way goes down for nearly 300 meters in height directly into the crater. Despite off season there were many tourists on the trail. On the way up it was easy to overtake them, but on the narrow way down into the crater it was impossible. Thus, we enqueued and moved down. It must be a similar feeling to hike up the Mount Everest, only thousand times harder: Queuing. One step. Waiting. Breathing through a mask. One step. Waiting. Waiting. Breathing through a mask. One step. Passing people sitting on the site, because its too exhausting. And so on. (I’m really into all the Mount Everest stories, but I would never ever go there).

The sky was pitch-dark and star-covered. But on the track were too many people with too bright torches and badly installed headlamps, it was not necessary to have your own one, the way was bright enough (Which was good because the battery in our provided torch was empty soon).
The track into the crater was hazardous. It was dark, slippery and from time to time immense clouds of sulphur hindered us to go ahead. The smell of sulphur is one thing. But to stay directly in a thick cloud of sulphur, without any visibility, burning runny eyes and unable to breathe even with a mask is something completely different and an experience for itself.

We were both really lucky to have a gas mask with us. But to see men of every age mining sulphur at the bottom of the caldera without any protection like a mask was shocking.
They work there every night, mining sulphur in the worst condition imaginable, carrying around 60-90 kg on their back to the top of the caldera (and then down again to the nearest village) and earning less than 10 cent per kilo.
It is really hard for me to understand why they are doing this. Because of the money? I don’t know… there must be a better way to earn such a small amount of money without risking your life and health. Why they don’t try to learn something? Anything? It felt cruel and unjust to see the miners being exploited so heavily…

Down in the crater we’re able to spot some blue flames. A mystical freak of nature. As far as I know there are only two places all over the planet where you can spot them. The one in the Ijen caldera and another somewhere in Africa. Unfortunately it wasn’t a clear night in the caldera, we just saw the flames a few times. The Ijen is an active volcano, so no-one can predict its mood.

The twilight started around 4:30. The sun was rising very fast. Half an hour later we finally saw the whole sensational caldera with a deadly sea, old lava flows, sulphur springs, the workers, the yellow sulphur, clouds of sulphur and the sunrise above us. One of the most impressive and surreal landscapes I’ve ever visited. It felt out of this world.

The way back to the starting point was also very breathtaking. To see what we had missed while hiking up in the night was simply great. It’s a wonderful national park and I assume you can spent weeks discovering every angle of it.

The contrast of the tourists having fun on a tour and the hard working miners left behind a strange feeling. And I hope that mining will stop at some point. But in total it was an awesome and unique experience, with so many new impressions.

After visiting the volcano everything, our clothes, our skin, our hairs, smelled like sulphur. And it was everywhere: in our noses and ears, around the camera and in Mo’s beard. On the way back, we stopped at a beautiful waterfall with clear spring water. Bathing in the cold water and cleaning ourselves from the remaining sulphur was very much appreciated.

Back at our homestay the breakfast was already prepared. After a shower, we decided to go by scooter into city to run errands and have a pastry or two.

I was a bit tired and probably difficult. But somehow, and without pissing each other off, we managed to write and send a letter to Germany, book our next accommodation in Malang and organize the train for the next day. Actually, we found a very nice place with authentic and super cheap Javanese food. That was the best food so far. What a successful day 🙂

Our train to Malang departed at 5:15 the next morning – another short night. Our host was so kind to give us a lift to the train station and his wife organized a cake for breakfast to go.

It takes around seven hours from Banyuwangi to Malang. Time that I was using to write down the impressions from the Ijen tour, while passing gorgeous rice field with some volcanos in the back. I’m really looking forward to our remaining days on Java.

For more awesome pictures see our gallery or check out our Instagrams: Katja and Mo.