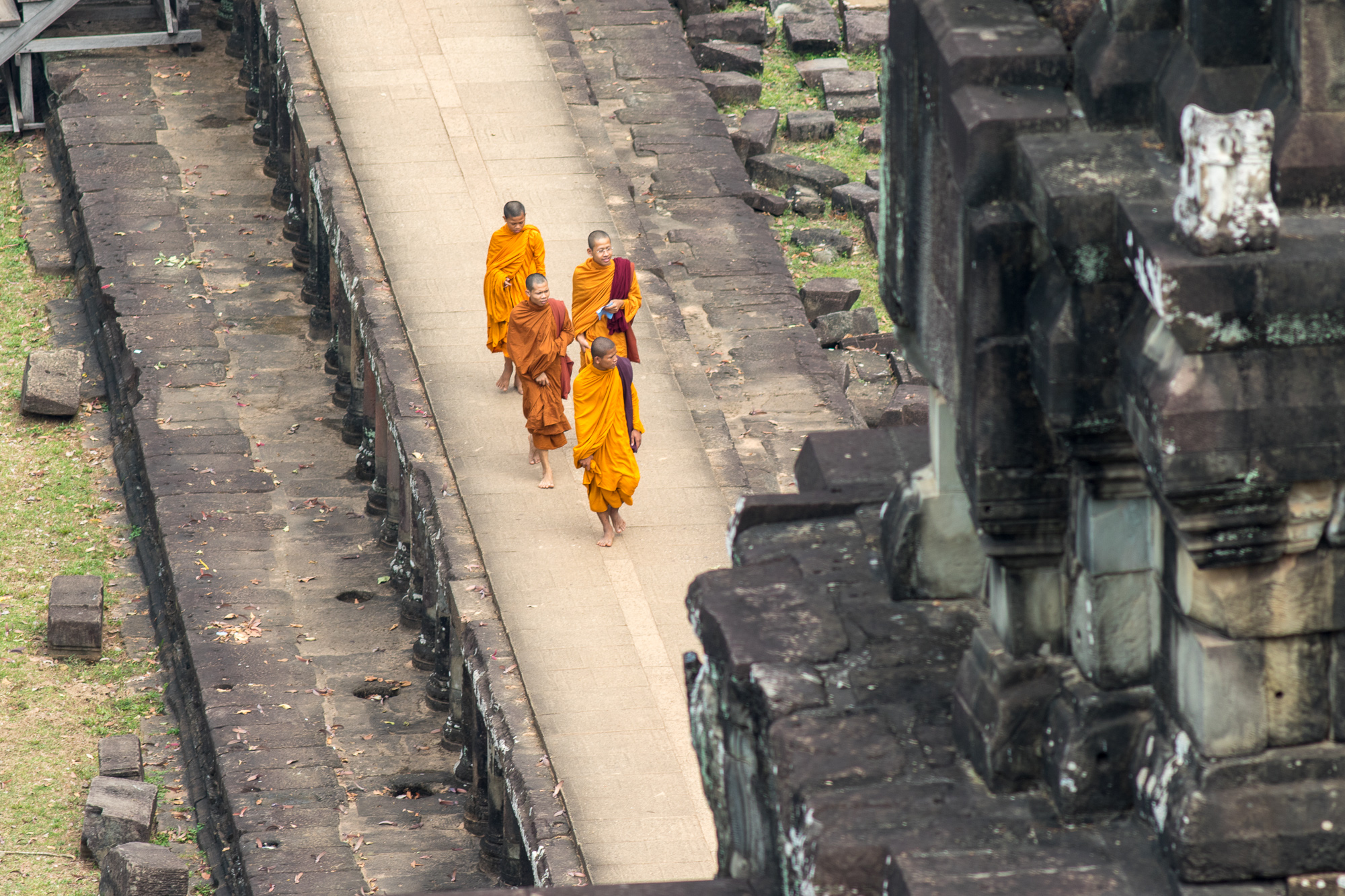 One of the reasons why we started this trip through south-east Asia was Angkor Wat, the largest temple complex ever discovered. I already visited some countries in south-east Asia, but never made it to Angkor Wat, which is somewhere in the middle of Cambodia.

As long as I can remember, I’m super impressed by old mystical ruins with a big history and especially temples. There was a time where I was seriously considering to study archeology to discover old ruins in the wild jungle, like Indiana Jones. But I decided against this path because I think that my mental picture was way more romantic than realistic. After dismissing my place at university for that study path (yes, I applied for that course and even got a place), I found out that I was right. A friend of mine studied archeology and she told me, that most of the time she is collecting and drawing small broken fragments without any impact.
But it’s hard to get rid of the romantic picture of it, it’s still attractive to me, even though I know it’s not realistic.

Anyway, our plan was to set up our home base for 5 nights in Siem Reap, Cambodia to explore Angkor Wat and surroundings.
I felt a bit guilty to just fly into a country to visit a single site and only stay in the most touristic city ever, without seeing anything else from it. But then again, it’s Angkor Wat.

As you might know, I caught a cold at our previous destination Kuala Lumpur, and I was still sick while entering Cambodia (but they let me in 🙂 ). I was so happy, that our hotel provided us free pickup service from the airport – very convenient and welcoming.
The hotel was a bit outside of the city center, but that wasn’t a problem due to the overload tuktuks at every corner. And Siem Reap as a city is not very attractive.
There is a pub street, thousands of cheap beer-, massage and souvenir places and also some fine dining options. But nothing really authentic. Same is true for food. This is not a complaint. After all, this city really only exists for people visiting the temple complex (it used to be a tiny village before the explorers arrived).

On our first day, I felt too sick to do anything. On our second day, I was still sick and didn’t want to do, eat or drink anything. But we were not in Siem Reap for fun and games. So we at least organized our access tickets to Angkor Wat. WOW… they are so expensive – 62 US$/pax for a 3 day pass! But it’s worth it. Also, someone needs to maintain the huge site itself.

Travel Pro Tip: If you buy the ticket after 5 pm on the day before you plan to visit, you are allowed to enter the park on that day for free to watch the sunset (So it effectively becomes a four day ticket).

Angkor Wat for the first time

I was kind of excited to go to Angkor Wat for the first time. We went there by tuktuk. The whole area is not walkable, it’s just too enormous, so you need some kind of transportation.
We arrived at the main site and it’s just unbelievable how big the whole complex is.

While I was sick, we watched some documentaries about Angkor. I’m not able to repeat all the stuff but it’s so interesting to see it in real. It’s not only Angkor Wat (which itself is way bigger and more beautiful than I expected). Angkor Wat is just the biggest temple of the ancient city of Angkor. The whole complex consists of different temples, places for ceremonies, districts, connected by canals and immense water reservoirs. If you have not seen it, you can’t imagine how enormous it is (and archeologists still discover more ruins every other day.)
From what I know, it was the biggest and well-developed city of its time, far bigger than London or other European cities of a millennium ago.

Despite that, its super crowded with too many tourists, especially Chinese and Korean tourists in big, loud groups.
Anyway, it’s breathtakingly beautiful and impressive. I love to walk through old ruins and try to imagine how the people lived here.

We did the so-called “small tour”, visiting different sites close to Angkor on our first day of the visit. It took us over 7h for just a small part of the whole area. I was more than happy that we bought a three day pass and I wouldn’t mind spending more time there.

The day after, we did the so-called “big tour”, again a whole day of visiting ruins around Angkor. But this time they are a bit further away from the city.
I was most impressed by the huge area of the whole site and the beautiful reliefs still all over the place. But it was also very interesting to see, how the city of Angkor must have evolved over its lifetime. Different temples used very different construction styles and materials.

I can’t imagine the feeling of discovering a site like Angkor Wat for the very first time. Jungle everywhere, some lone monks living next to a big old, to the western world completely unknown, abandoned city. And the original explorer wasn’t even looking for something like this. He was supposedly searching for some new kinds of insects. And instead, he found the ruins of the biggest city of a thousand years ago.

After two days of visiting Angkor and its surroundings, we decided to do something different. The guilt of just flying to Siem Reap and visiting “only” Angkor Wat, without even trying to learn more about the culture and the people of Cambodia took over.

That’s the reason why we decided to do a guided tour to a rural market and a floating village. Mo found a very good tour operator.
Our Guide was born in a village close the market we visited and welcomed us to his house and family.
We biked to the local market and he showed us all the places where he grew up. It felt so great to ride a bike again and we really missed our beautiful single speeds back home… that’s one reason why we need to come back to Berlin 🙂

After the bike ride, we went to a village next to the Tonle Sap (the biggest sea in Indochina) for having lunch at a very local and authentic place. The people over there were so welcoming, it was just incredible. The food was simple, but super delicious.
After lunch, we took the boat to a floating village. We passed simple houses build on stilts. They build it on stilts because the river will grow during rain season. It such a different and simple life. It’s hard to imagine how this area will look like during rain season.

The whole trip showed us the life of the local people in the countryside. It was an authentic and unforgettable experience. I’m curious how this village-life will change over time and I’m so happy that we were able to learn so many things about the life in Cambodia outside of the major touristic cities.

For the day of our departure, we had a special and unique plan… watch the sunrise at Angkor Wat with thousands of other tourists. Nevertheless, it’s still worth it. Entering the ruins in the darkness and finding a nice spot to watch the sunrise is an unforgettable experience. In the beginning, everything is dark (except all the torches) and then you can see the beautiful and unique silhouette of Angkor Wat starting to take shape on against the purple and pink sky.

Then you’ll think, that was it. But a few minutes later, you start to see it: a small glimpse of the glaring red fireball. The sun rises so fast, after less than 10 minutes you can see it whole (and then, that really was it).
It’s so surreal. And yes there are many other tourists and it’s not really romantic, but still majestic and absolutely worth it.

After sunrise, we strolled around a bit, then went back to our hotel for breakfast and to prepare our departure towards Vietnam.

Siem Reap as a city is touristic and like many others. But you should definitely have Angkor Wat and surrounding on your bucket list – it’s maybe the most spectacular sites I’ve ever visited.
Cambodia itself is still a rather poor country, but if you decide to go just one step off the beaten paths, you will find nice and welcoming people and a country well worth visiting.

For many more awesome pictures see our gallery or check out our Instagrams: Katja and Mo.