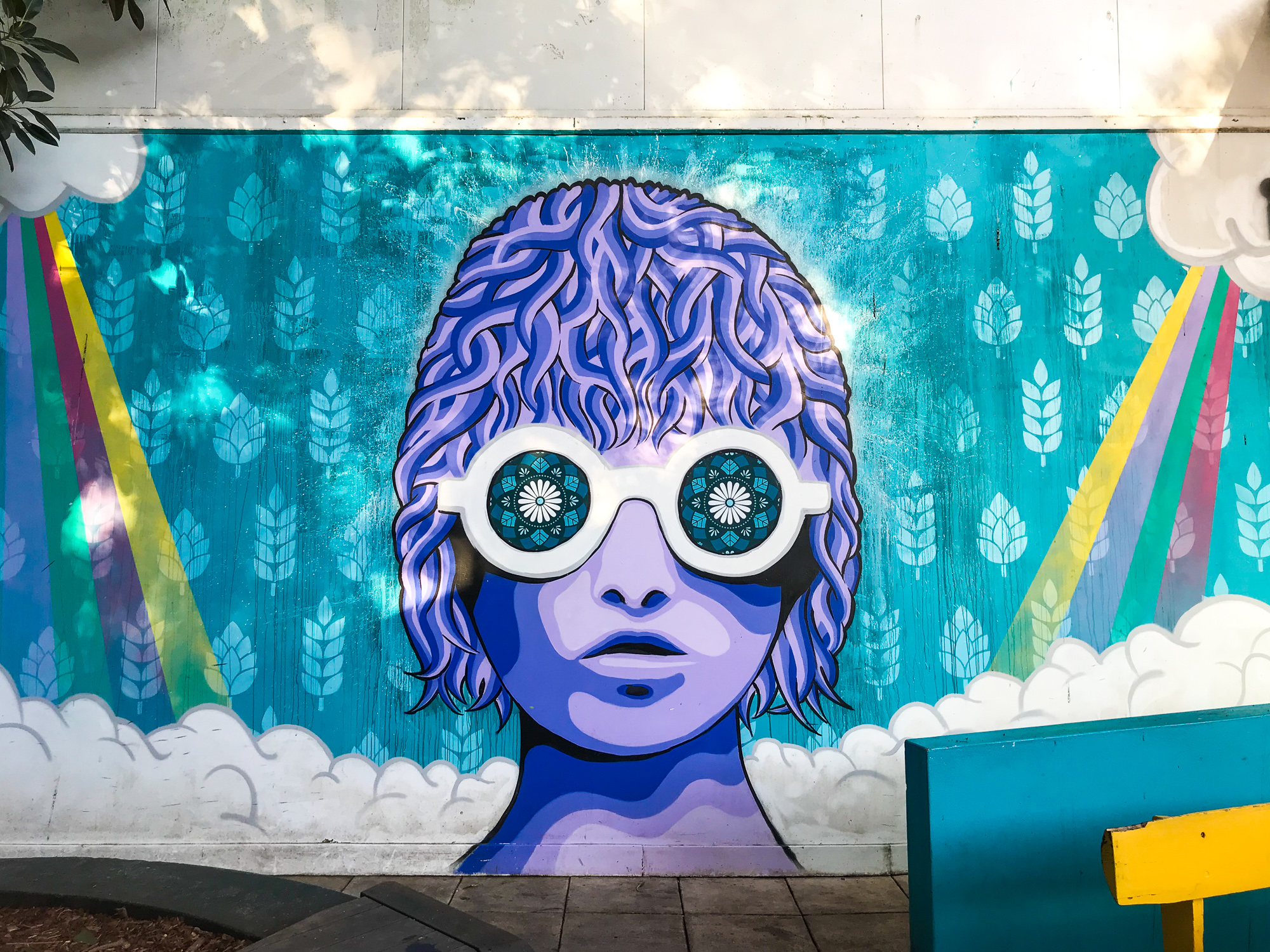 As you know, we live in Sydney’s beautiful suburb Manly. It’s as close to perfect as possible. It has a decent coffee & food culture, amazing views, and a beautiful surf-able beach.

Since we moved here, Mo is totally addicted to surfing. He spends nearly every morning before work for at least 30min in the water. Which means that he goes down to the beach right before sunrise around 6am. I mean, that’s commitment… Honestly, I never really tried surfing in Manly because the waves are often kind of too steep for my taste.

We do love it in Manly, but somehow the idea formed in our heads that we had to spend a long weekend in Byron Bay, which is about 800km north of Sydney – basically around the corner for Australia. We heard rumours that is a bit of a surfers paradise. And we noticed it sneaking up on us from various weird angles. We were having an awesome coffee – the beans were roasted in Byron Bay. We bought a nice soap – it was made in Byron Bay. Mo’s favourite peanut butter comes from – you guessed it… Byron Bay. One of our favourite (easily available) Beers – brewed in Byron Bay…

It seemed to be some kind of promised land. It was just calling us somehow. We couldn’t resist any longer. It even seems to have a decent yoga culture. We booked our flights and decided on a surf school for some lessons to improve our surfing skills. Which means, I would suffer in trying to learn to surf and Mo enjoys the time playing in the water, hopefully getting some valuable insights and tips for improvement. Great plan!

Saturday: We arrived by plane in Ballina and took a hippie bus (literally!) to Byron Bay. I was surprised by the beautiful landscape. I expected flat land, but it was green and hilly; very similar to the alpine upland. I loved it! Byron Bay itself seemed to be a friendly, bit touristic small beach town. Plenty of cafes, restaurants, bars, and eco-shops. Nice!

After arriving at our accommodation, just a simple room in a hostel, we went out for a walk. First to the Beach and then to the beautiful lighthouse that is one of Byron Bays landmarks. During spring and autumn its possible to spot some whales from the coast. What an amazing and beautiful place to be. Unfortunately, Mo was a bit frustrated, because he was not in the water on that first day. He feared missing out on some nice waves and the sea was calling him strongly. But we fixed that on the next day.

Upon arrival at the beach, we dropped out stuff on a nice place of white sand in the shades and then both went to the toilets and change rooms. It was still pretty empty and we had no valuables with us. So we felt pretty safe about leaving our bags alone in the open. However, when we returned, there was a wild turkey sitting on top of our bags, going through all of our stuff and throwing it in the sand! Throughout the morning, I had to shoo those crazy turkeys away from our bags multiple times. There wasn’t even anything edible in our bags (besides a stick of Mentos). Maybe it smelled Mo’s surf wax?

After a few hours, we both had enough and decided, that it’s a good idea to spend the afternoon more in the refreshing shades of places like one of the local breweries.

Monday: After the weekend, it was time for our surfing lessons. I was kind of nervous because I tried surfing just a few times and most of the time I was suffering. Anyway. It was time for another try.

First, coffee and then surf school. Our surf coach was already preparing everything. He was I nice dude in his early twenties, also from Manly (weird coincidence?) We packed some boards into the car and took off back to The Pass. At the beach, he explained everything very well and I was able to do all the exercises on the beach and in the water. The waves where pretty small on that day, which made me pretty happy. Honestly, I kind of enjoyed my progress and I’m willing to continue to try to learn to surf. But after over an hour in the water, I was done and took a break at the beach. Mo was still in the water for two more hours, learning some new tricks. I would say it was a successful morning [Note from Mo: I fully agree!]

During the afternoon, we tried to snorkel to the wreck next to the main beach. But the wind and waves were kind of strong, and I was super scared of the wreck itself. On good days it’s possible to surf over the wreck… that must be a weird experience. But anyway, we had enough sun and water for the day and decided to check out Byrons other brewery in the afternoon. It was another perfect day.

Around noon, we returned the board, took another last stroll through Byron and had a little snack at a fairly decent sourdough bakery. Fully nourished, we headed to the pickup point of one of the airport busses (this time not a hippie bus) to catch our flight in the late arvo.

The surf spot and the beach is just perfect. Food and coffee places are good and the vibe of the city is very chill. But I can also fully understand the critics, that say Byron isn’t what it used to be. Honestly, I think Byron Bay is a bad choice in summer or during vacation time, it must be super crowded. It has become very touristically connected and has lost any vibe of secret surfers paradise it may ever have had. But Australian spring or autumn seems to be the perfect time of the year – less crowded, yet nice and sunny. We still have some unfinished business there (unfortunately the peanut butter factory was closed during our stay and we did not manage to check out the yoga places), but we had a wonderful time in Byron Bay. We’ll be back…