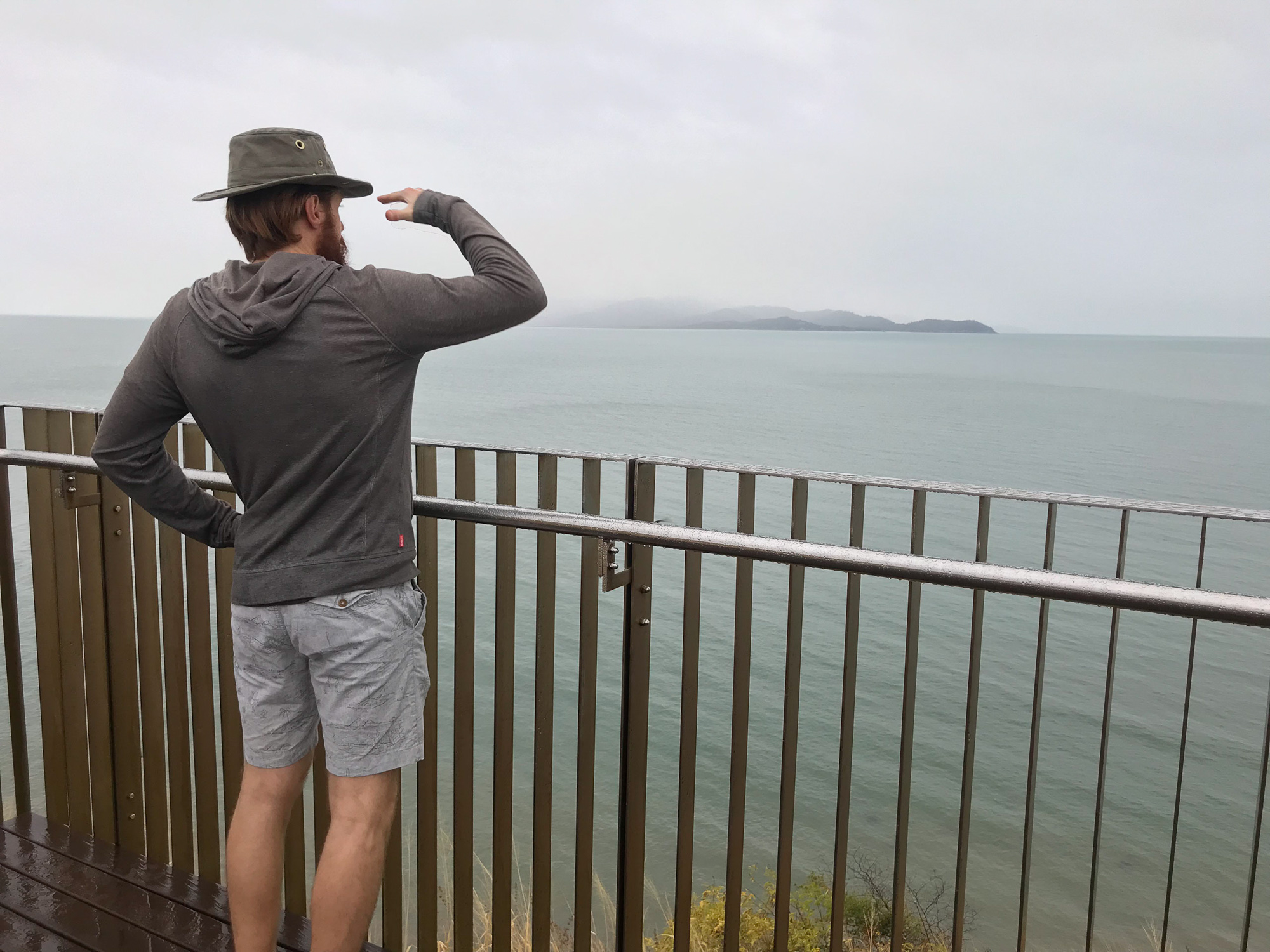 Let’s go visit Townsville! It has 320 days of sun a year and we can go snorkel at the famous Great Barrier Reef!

Well… We had 5 days of rain (partial, but still) and our snorkelling trip was cancelled due to bad weather. But I’m getting ahead of myself. Let’s start this story at the beginning.

End of June, we had some good friends over here in Straya. Their visit was more of a coincident. They had started planning this trip long before we announced our temporary relocation to Sydney. Since they were travelling as a bigger group and with smaller children, they planned everything way ahead – we were seriously impressed by their level of preparation (this is very much opposite to our “we’ll make it up as we go along”-approach to travelling). We got access to their planning sheet and the start and the end of their visit was in Sydney. Too easy – we’d spend a few days with them and show them around.

But wouldn’t it be nice to have some more time with good friends you haven’t seen in a while (and probably won’t see for a while afterwards as well). So we scanned their plan and our calendars for chances of overlap. They were planning to fly up north and then have a road trip back down towards Sydney. One weekend was a very nice fit. They would spend a few nights in Townsville, we had nothing planned on that weekend and I had no trouble taking Thursday & Friday off. Townsville itself didn’t sound too exciting to be honest, but the vicinity to the reef made it an easy choice, since we haven’t been there yet.

Since our friends were travelling in a motorhome and hotels in Australia aren’t cheep, we thought it might be fun to go camping at the same camp ground they would be staying. Weirdly enough though, we couldn’t book an unpowered site online. It showed no availability even though it was off season. We called them and they said it would be no problem to find a place for a small tent. Reservation confirmed – great! However, they asked us if we would be coming for the race? The Race? What race? Turns out, we picked the weekend of the Townville 400 – basically the only major event in Townsville in the entire year. The lady on the phone was a bit surprised that we weren’t aware of this and warned us that this might cause a bit of chaos in the city. Well, it explained why flights were a bit more expensive than we had hoped for.

For me, the race was a nice bonus – I like fast cars (Katja even suggested that this was planned all along and no coincidence – I can neither confirm nor deny this). But the main reason we were coming to Townsville (besides spending some more time with good friends), was the opportunity to snorkel at the reef and to visit some of the small islands at the coast of Townsville. The main attraction and reason for the stopover of our friends is the wreck of an old war ship (SS Yongala). However, that is considered an advanced dive and way out of our league.

So, our original plan was to arrive a day before our friends in the late afternoon, check in to our brand new tent and have a calm evening in Townsville. The next day we would go snorkelling at the reef (we scored a nice discount for a full day trip) and on the evening of that day our friends would arrive. The following day, they would go diving and we would check out the city of Townsville (and maybe the race). And finally, we would spend Sunday all together exploring Magnetic Island at the coast of Townsville before we would catch a late flight back home.

As it turns out, quite a bit. But let’s start at the beginning. We arrived in Townsville and were a bit underwhelmed by the weather. It was rainy and cloudy and not as warm as we had hoped for – definitely not an escape from Sydneys winter weather. Nonetheless, we made our way to the camp ground. We used public transportation, which turned out to be the smallest bus ever. Just barely big enough to transport maybe eleven people – another reminder that Australia is a car country. The bus driver was very friendly, very Australian and had a chatty day. It took us a minute to get used to his thick Australian accent but he was very curious about our plans and gave us lots of local recommendations. Super friendly and very useful. He also dropped us off somewhere between two stations to make it easier for us to reach our camp ground.

On the campground we checked in and quickly erected our new tent. Proud of our new home, we decided it was still early enough to explore Townsville. We followed one of the recommendations from Mr Bus Driver and walked along the coast towards the city center. Townsville is a bit bigger than it looked on the map. Turns out, it’s not really walkable. As usual, maps in Australia are very deceptive when it comes to distances. But the walk on the beach was still nice. We were a bit surprised by the amount of warning signs for marine stingers (jellyfish) and the frequent first-aid vinegar bottles along the way. Luckily, we never had to make use of the vinegar.

During our walk into the city, we received a notification from our snorkelling trip confirming the tour and reminding us to be on time. Awesome! That brightened up our mood and we decided to wait at the main beach road for the “classic car parade” that was bringing the Townsville 400 drivers to some kind of meet and greet. After the parade, we found ourselves some dinner and then returned early into our tent to get a good night of sleep.

We got up very early and headed out to catch an uber to the meeting point. Well, except there were no uber at that time of the day – 6am. Having to deal with this even before our first coffee was a bit annoying. But luckily we found a taxi company that was working and promised to pick us up in time to reach the marina at 7. No worries, mate.

Having dealt with the first little crisis we arrived at the marine, found our vessel and walked towards it. Weirdly enough though, the only other people were walking from the boat to us – that didn’t seem right. And it wasn’t… Turns out, the weather got a lot worse during the night and the operator had to make the hard call to cancel our tour last minute. Big crisis. And we haven’t even had a coffee yet. We decided to deal with this after our first coffee and just went for breakfast.

With some coffee flowing through our systems, we considered our options. After some back and forth and with the friendly help of the local tourist information, we found another snorkelling tour on the following day. Only downside, it wouldn’t go to the Great Barrier Reef but instead went to a remote island. Better than nothing. We confirmed the booking and also organised the refund of our initial tour (they fully refunded us within a few days).

But what to do with the rest of the day? Our friends wouldn’t arrive until the evening. And it was still early morning. We went for a second breakfast. Then we went into the local museum and an art gallery. Once we were finished with those, it was around noon. And we felt like had seen what Townsville had to offer for us on a rainy day. So we went into the local brewery, tasted their beer and and played some pool. Could be worse…

We just stayed there until our friends arrived and sealed the day with a nice BBQ on the campground. Our friends were in a good mood, really looking forward to their dive trip and happily reported that they just got a message confirming their tour. Coincidentally, their tour was operated by the same company that ran our cancelled tour. We didn’t want to spoil their mood and didn’t mention that we got a similar message before our tour was cancelled anyways.

We had to get up early again to catch our cruise to the lonely Orpheus island off the coast of Townsville. The cruise was nice and we even saw some whales. The island itself used to be some military base in the second world war and was abandoned afterwards. Now it just has a campground and a jetty for boats to land. It was really nice and we had some good fun snorkelling. Although the sun was hiding behind some thick clouds from time to time and that dropped the temperature significantly. We had a great day, and Orpheus island is a nice place. But it’s not really worth going to Townsville just for that.

On our way back, we got note that our fears came true. The dive trip of our friends – the main reason they came to Australia in the first place – was also cancelled. And to make it even worse, they had no chance to reschedule during their visit to Australia. Huge bummer.

To cope with their change of plan, they went to Magnetic Island while we were on Orpheus and we simply met for a beer and another round of BBQ in the evening (I love that the Australians love their BBQ!). They handled the situation gracefully but their disappointment was still a bit visible. Nonetheless, we had another fun evening.

On our last day, we got up early again to pack our tent and visit Magnetic Island. Magnetic Island is a bigger island and much closer to Townsville with a regular ferry service. Our friends stayed on the camp ground, slept in and had a relaxing day of house laundry and chill.

On Magnetic Island, we rented a car and cruised around the island. Did some smaller hikes, found a few rock wallabies and went for a swim. It was a very nice day with just a little bit of rain. And then we went straight from Magnetic to the Airport and back home to Manly. I think we made it in around 8h from Magnetic back to our apartment.

Our plan sounded so good. What could have possibly gone wrong? Let’s recap and see:

Four out of four… Could be worse. We all had a great time even though it would have been nice to spend a full day with our friends. Life takes some weird turns from time to time. Who knows what it was good for. I don’t think we’ll get back to Townsville soon – but we will surely make another attempt of snorkelling at the reef!

Many thanks to L., P. and their families! Was great to have you here with us!