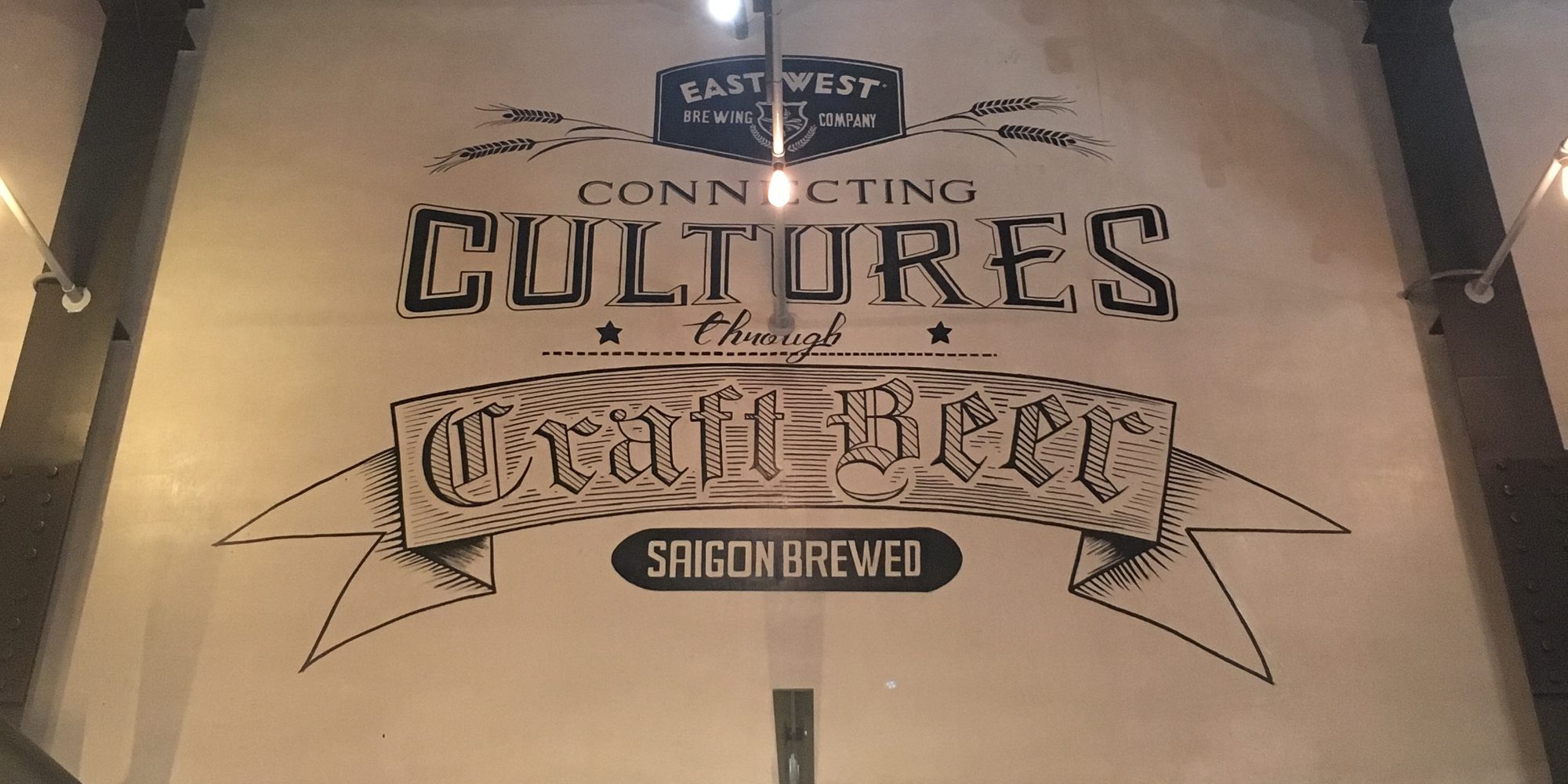 When you know either of us, you are probably aware that fermentation in general and specifically alcoholic fermentation of starches is very much in our area of interests.

As such, we usually try to find local breweries and sample local alcoholic beverages during our travels. However, this hasn’t always been easy during the last three months.

We started our journey on the lovely island of Bali. While most of Indonesia is Muslim and therefore keeps away from alcohol, Bali is different. It has it’s own culture based on Hinduism and has no problem with an occasional drink or two.

Still, the selection of alcohols is rather disappointing. There are the usual imported lagers (Heinecken and co), which are neither interesting nor pleasant. Then there is the one locally brewed mainstream Lager called Bin Tang. It is an easily drinkable, but rather bland lager. We tried it once, but besides it being cheap and easily available, there isn’t a lot of good things to say about it.

There are also a few smaller breweries run by foreigners in the touristic south of Bali that brew the usual batch of IPAs. Somehow, we failed to ever try any of those but didn’t feel like we were missing out.

The rest of our stay on Indonesia Islands was in primarily Muslim areas. Imported beer and Bin Tang was available in the touristic areas but it was very obvious, that this was only for foreigners.

We also failed to find any other interesting, alcoholic beverages. There seem to be some distilled rice liquors, but they are mostly just a way to get drunk cheap and fast – not what we are looking for.

As such, we barely had any alcohol at all during the first few weeks. After a while, I realized my last drink was weeks ago and there was nothing missing from my life. I take that as a good sign, that I’m not (yet) an alcoholic and could stop drinking anytime again in the future.

Our next stop was Kuala Lumpur. With KL being in Malaysia and therefore still Muslim, there was still no local brew to be discovered. However, we accidentally stumbled over a very nice craft beer bar (Taps) and the selection on tap was too good to skip it. We enjoyed some lovely and well made (imported) brews and were reminded of just how delicious beer can be.

But ultimately, we were a bit disappointed, that we failed to sample any Malaysian fermentation products.

Our next stop was Siem Reap in Cambodia. Finally, a country that also enjoys a drink from time to time. However, the taste seems to be none of their priorities. There is a decent selection of local and national lagers: Angkor Beer, Cambodia Beer, Ganzberg (German-sounding names are always good for a beer, right?). None of them terrible, none of them great – most of them ridiculously cheap. We enjoyed a few in the pool bar of our hotel – double refreshment on a hot day worked very well.

We also discovered a small brewpub, aptly named “Siem Reap Brewpub”. Luckily, they offer tasting flights, so we could sample most of their beers from tiny glasses. Some were decent, none were great. The atmosphere of the place was a bit to clean and upscale for us.

Beer of the people

Next on the list: Vietnam. Now it got interesting. First of all, there was again a wide selection of local and national lagers. All rather similar in taste but for sure not identical. The green Saigon (Bia Saigon Special) was our favorite.

Then we found a good number of small craft breweries, some of them creating really good and special brews. Our top three were:
1. Furbrew (Hanoi) – lots of funky and interesting brews. Often with local ingredients or spices. Good selection of sours and even a nice barleywine. Lovely tap house. Don’t miss this when you are in the area.
2. Pasteur Street (Saigon, but available all over Vietnam in hipster places) – Some good brews, more traditional styles enriched with local spices. A few interesting sours available in their tap room, which is very cozy by the way.
3. East West (Saigon) – Wide selection of traditional beer styles on tap. Beautiful tap room in industrial chic design with brewery visible in the back (we were reminded of Stone Brew in the South of Berlin). What we sampled was superb and when you are looking for more traditional beer styles without funky herbs, this is probably your best bet.

But this was not the end of our discoveries in Vietnam. Especially in the north, there is a tradition called Bia Hoi. A very light lager, always served straight from the cask and dirt cheap. A mug will run you somewhere between 20 and 40 cents. When the keg runs out, the party is over. The kegs are usually unlabeled and you should really try many different places – the flavors can vary quite heavily.

Bia Hoi is a tourist favorite in Hanoi but the locals enjoy it just as much (although usually in different areas of the town). After a hot day, it is really refreshing and since it is a very weak and cheap beer, you can easily quench your thirst with it and don’t get too wasted.

One more thing about Bia Hoi. If you look it up on the internet, you will frequently read that it is brewed daily and then delivered to the places that sell it while still active in the keg. Take it from me, this isn’t true. I brew my own beer, I know how very young beer tastes like and Bia Hoi tastes nothing like it. It might be younger than your usual lager, but this beer has still a maturation phase longer than a few hours. Also, it is just too clear from the keg (up to the last mug), to be still actively fermenting in the keg. Maybe it was like that in the past, but those times seem over.

However, don’t let that spoil your fun – cheap Bia Hoi with some friends is a great way to enjoy a hot evening in Vietnam (and you are quite likely to not regret it the next morning unless you really overdo it).

In recent years, it has become so widely asked for by tourists, that some pubs just water down regular beer and sell it for cheap. Be aware – this is not what you are looking for…

Beer is not the only source of tipsiness in Vietnam. There is yet again a rice based, distilled beverage widely available – rượu. While we were hiking in the Sa Pa region, it was commonly referred to as “Happy Water” and was of dubious origin – usually coming in reused water bottles. It was a staple on the evening table. The taste is not really refined and thinking about it as rice-vodka is a good approximation.

It seems to be quite common to soak fruits, roots or even insects in the stuff and that can create quite interesting and even pleasant shots. We had a tasting flight in a restaurant called “The Hill Station” – and some were damn good (no insect-based ones available there).

Next stop: Laos. They also have a tradition of soaking nasty little critters in strong rice-vodka. The stuff is called Lao-Lao or Lao Whisky and is often enriched with things you wouldn’t want to find in your drink. We had the honor of sampling one with bees. No, it didn’t taste like honey…

But the local lager is something different. The ubiquitous brew (it is quite close to holding a monopoly) is called Beerlao – and it has a bit of a reputation for being brewed with finest Laotian jasmine rice (besides imported malt). It is a very well drinkable, rather sweet lager. Not too bitter. And if you believe in it hard enough, you can find hints of the smell of jasmine rice in your glass.

There seems to be one other brewery, creating yet another boring lager. We failed to find any interesting craft beers in Lao.

However, Laos capital Vientiane gets an honorable mention for its superbly stocked (but painfully pricey) Belgian beer bar “Chokdee Cafe”.

And the winner is…

To sum this post up, regarding alcoholic flavor variety, up to this point in our journey, Vietnam is the winner.

But if you are looking for perfectly refined, meticulously crafted beverages, based on fermented starches – South East Asia might not be the best place in the world. This should not come as a huge surprise, right? Still, there are a few hidden gems to find if you search for them. Just don’t search between all the beers with a suspiciously German sounding name, like “Ganzberg” or “Stammgast”.

There will be follow up posts to this one as we move along on our journey. Until then, pour yourself a glass of your favorite beverage and cheer in our general direction – một, hai, ba, vô!

No better way to start into a new day, no better w

Sydney is starting to get ready for #vividsydney -

Going into the weekend

We found this curious floater while kayaking a whi